skip to main | skip to sidebar

With 8th edition on the horizon, rumors are swirling big time as for what's in store. I'm looking forward to the changes and have the book on preorder. In the meantime, I'm prepping some minis to prepare for 8th (along with Core Comp coming up in October). Here's what I have:

These minis that will turn the tide and win me all games going forward! OK maybe not, but this was a fun conversion.

I have a box of Dwarf Miners I've been aching to use for conversion purposes. 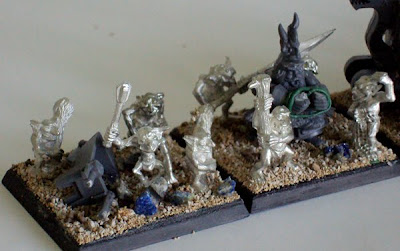 This Miner captured by Snotlings fits the bill nicely. Can't wait to paint it and will post pics upon completion. 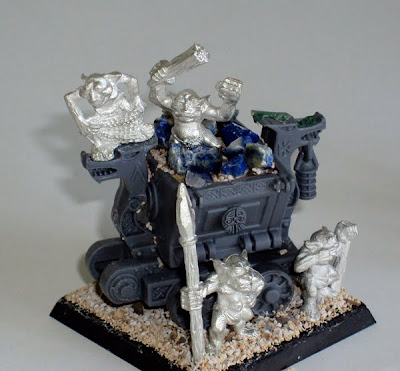 I picked up a box of the new Boar Boyz. Despite ALF claims, I quite like them. This is to show the size comparison to the old ones - I didn't realize how small the old boars were. I have these planned for Savage Boar Boyz...Git bak 'ere! 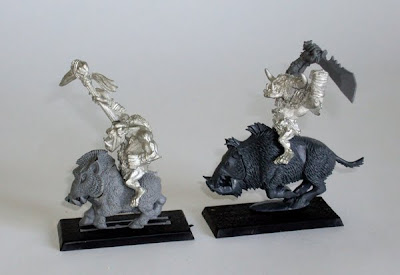 Some other models I have prepped, with 8th and Core Comp in mind: 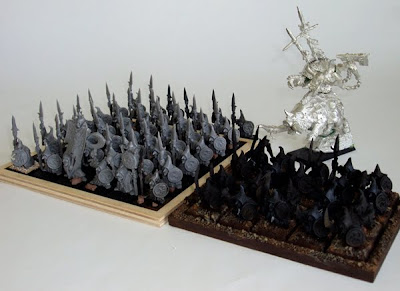 And finally, I wouldn't post without some progress in actual painting. I completed this unit maybe two months ago but am just now posting: 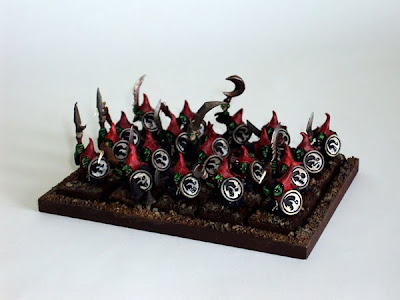 The excitement of 8th edition is building up, and I have to channel my WHF energy somehow—look for updates in the coming weeks!
Posted by TrekkerYu at 3:24 PM No comments:

Sheesh! How about some updates?

So it's been a while for any hobby updates. However with Adepticon coming up, progress is being made.

Looks like the High Elves for the A-con Championships again this year. I considered O&G, having painted so many, but will need all of the competitive help I can get.

In an effort to lighten up my overall army look, I'm going back and repainting some minis to help them visually pop more. These Shadow Warriors were among the first WHF minis I painted way back in 2002. The mini on the right is touched up with a lighter scheme: 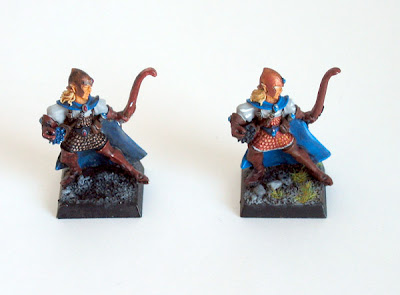 Next up is my Tyrion model that I purchased back when I started. I'd planned on using it as a Lord choice in my Championship list, but after some practice games decided on another build. It still needs the gems painted, sword, etc. but with my list priorities changing, this is now on the backburner. Too bad though, it was fun to paint! 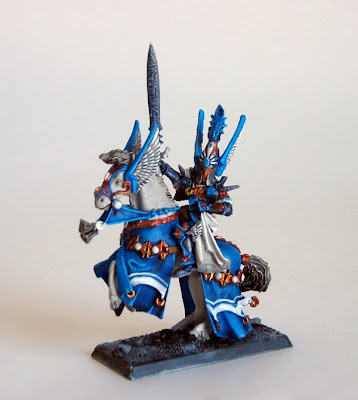 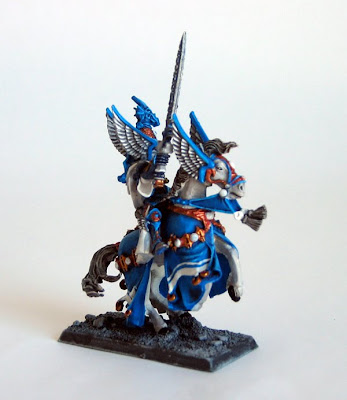 I painted this mage for Invasion Kenosha, and will use it for A-con as well—my first non-GW fig in my HE list! 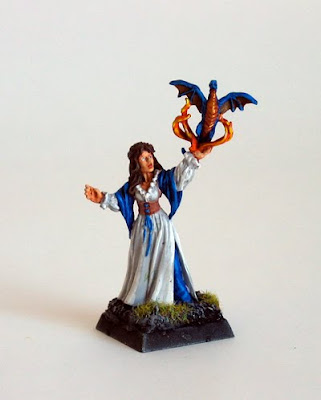 Fortunately I don't have too much painting to do this year. I'm focused on improving my game as that's where I typically lose points. In 4 practice games this year, I'm only 0-1-3. Much improvement to be made, but I have 8 weeks to practice.

Lastly, here's a conversion I'm working on for my Orcs: 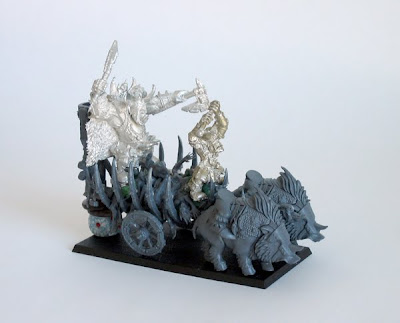 Someone over on the Warhammer Forum did a great conversion using the Corpse Cart for their Beastmen. One thing I need for higher painting scores is some conversions so I thought I'd try. The hero is the Avatars of War model, and is magnetized so I can remove him if needed.

More updates in the coming weeks!
Posted by TrekkerYu at 8:27 AM 3 comments:

So today was the WHF Ard Boyz tourney over at the bunker. I was tabled on game 1 - not playing a smart game at all, with some amazingly bad rolls. Cool opponent though - that group drove the 11 hours from Maryland!

I left after that game*, not having a chance to place and my leaving wouldn't adversely affect the other games. The plus side is I met a lot of cool folks I've only known by screen names or by podcast voices (Joe & Chuck over at the Waaaghcast). Also saw some regulars there, either playing or just hanging out.

In the end, I realized super competitive events like this are not for me. Thinking back to other tournaments, it's typically the soft scores I do better in (sportsmanship, appearance) versus battle and objective points. John over at Plastic Legions does a good job of dissecting the topic.

Unfortunateley I had to miss both Core Comp and a local 1500 tournament in order to attend Ard Boyz, both of which are consistently fun times. But now I know - the whole Ard Boyz experience has been nothing if not educational!

*leaving early allowed my to take my wife to see New Moon - she was a little annoyed I was going to bail on her...so my getting stomped worked out in that respect. Too bad the movie was less than stellar.
Posted by TrekkerYu at 7:43 PM 1 comment:

Too much gaming, not enough time!

With our kids getting older in age, I'm finally able to go out and do some more gaming. I'll never be able to get the amount I'd like, but still a decent amount.

I'm currently wrapping up a Bloodbowl league at the local game store - man is it fun! Playoffs should be announced soon, and if I'm lucky I'll make it in! I can't rely on any other Chicago sports team to excel so I'm taking matters into my own hands!

Also coming up is the 'Ard Boyz Finals tournament held at the Chicago Battle Bunker. The winners from across the country will be there, and one of the local Adepticon Tourney organizers will be running it, so it should be a good time. I plan on fielding a completely painted 3,000 point army.

Also, my buddy Steve is running a UK Masters style WHF tournament at Games Plus in December. I'm very much looking forward to this, as Games Plus - for whatever reason - doesn't have much of a Warhammer following. Time to change that! From the looks of registration, there should be some new faces there. This will also be a good time to run some 2250 O&G goodness. I was plannning on Orcs for the upcoming Core Competency Tournament but the wife would kill me for being gone so many weekends. Have to pick my spots...

Lastly, we have the annual 'Nerd Night' coming up. This is just a night of board games/card games with sci-fi action movies playing in the background. It's an annual event (every Wednesday evening before Thanksgiving) and is a great time.

All in all, a great time for gaming. Now only if my wife would stop talking about a third kid. Argh! Better get in all the gaming while I can!!!
Posted by TrekkerYu at 12:13 PM No comments:

So today was Round 1 of Ard Boyz. What a day! Had 3 great games against neo-maxi cheese lists - good time!

Game 1 vs. Slann/2 Engine Slann. We danced around for a bit before I finally managed a flank charge on his Slann unit with DPs and a Dragon (overran into his unit). Meanwhile my other Dragon broke and ran down one of the Engines. Major Victory for the twin dragons!

Game 2 vs. 19PD Tzeentch list, 3 blocks of 20 Horrors, 6 Heralds, Scribes, 2xFlamers, 2xHounds, Fiends, Furies. I got into combat early with the Dragons but his area affect spell from the Horrors & Beast Cowers was too much for my 4DD and 4 scrolls to bear. Minor loss for me. I'll get you next time Flickering Florido!

Game 3 vs. Crone Hellebron-led DE. Was doing OK shooting his all combat/no shooting/magic list until I charged his Witch Elf unit containing Crone & BSB. Ouch, even with the two Star Dragons. I was wiped out save one Prince on Dragon. Alex - a 20 year veteran of the game - took first place and I won't be surprised to see him at the finals competing for a top spot.

That said, we only had four people show. Four! As a result I took third despite a Major Victory/Minor Loss/Major Loss record. Also walked away with some GW product which was cool. That will go towards my round 2 list; nothing like feeding my addiction via itself! Heh heh.

Thanks to the Dice Dojo for hosting.
Posted by TrekkerYu at 10:52 PM No comments:

I've entered my logo into the Heelan Hammer competition. Winner will get access to their SAWC section (Super Awesome Wargamers Club) which includes bonus strategy and painting tips. Here's my entry:

And the thread with all entries can be viewed here.

Check out the Podcast if you have the chance, it's the best strictly-WHF podcast out there IMO.
Posted by TrekkerYu at 11:54 AM No comments:

'Unkredible 'Ulks iz in da' House! My FLGS is hosting a Bloodbowl this league that has a whopping 16 players! We'll see who's left standing when the dust settles! 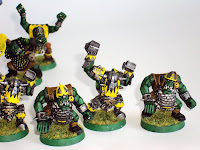 Bonus points given to those with completely painted teams at season open. I will need every free point I can get!
Posted by TrekkerYu at 11:45 AM 2 comments:

The Pledge is to paint more models in 2010 than I buy. Here's a running tally. The pledge was started on the warhammer forum.